If you wish to receive Credit Suisse FX Strategist pdf research report (and many other) on a regular basis, subscribe now or request a free 5-day trial. 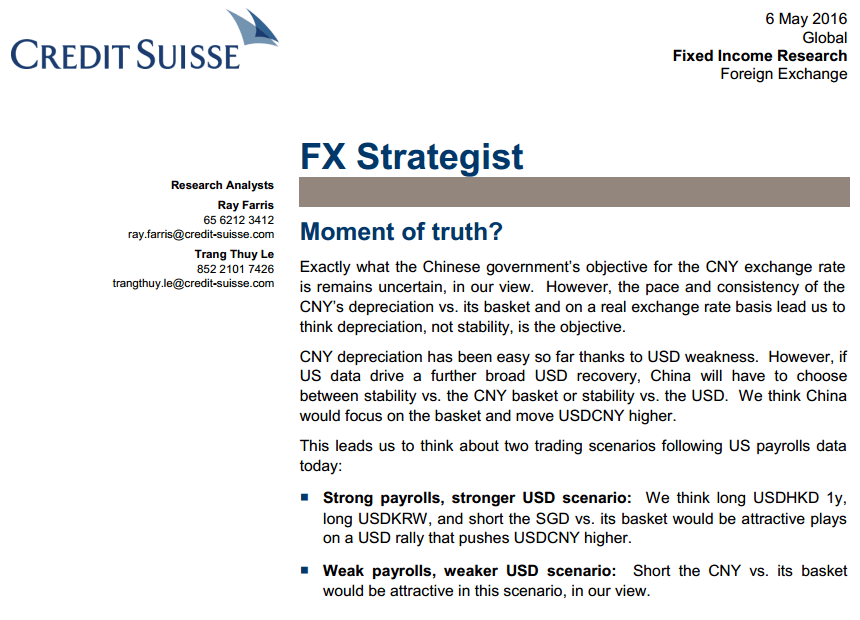 Exactly what the Chinese government’s objective for the CNY exchange rate is remains uncertain, in our view. However, the pace and consistency of the CNY’s depreciation vs. its basket and on a real exchange rate basis lead us to think depreciation, not stability, is the objective.

CNY depreciation has been easy so far thanks to USD weakness. However, if US data drive a further broad USD recovery, China will have to choose between stability vs. the CNY basket or stability vs. the USD. We think China would focus on the basket and move USDCNY higher.

This leads us to think about two trading scenarios following US payrolls data today:

■ Strong payrolls, stronger USD scenario: We think long USDHKD 1y, long USDKRW, and short the SGD vs. its basket would be attractive plays on a USD rally that pushes USDCNY higher.

■ Weak payrolls, weaker USD scenario: Short the CNY vs. its basket would be attractive in this scenario, in our view.

We don’t like saying we don’t know, but the fact is that we are still uncertain what the Chinese government’s objective for its currency really is.  However, if the USD rally continues, China will be forced to reveal its hand.

The People’s Bank of China’s (PBoC) recent management of the CNY leads us to believe its objective is depreciation of the CNY on a basket basis, particularly in real exchange rate terms.  The CNY has fallen more vs. its basket than we have expected, leaving USDCNY higher than our three month forecast of 6.43. We think this tends to reinforce our outlook for USDCNY to rise to 6.65 in 12m given our forecasts for the USD to recover against most currencies in the second half of this year.

In the near term, if US payrolls data lead this broad USD rally to emerge sooner than we expect, stress around the CNY will probably rise over the next month or so. In contrast, if US data resume USD weakness, it would allow for a more benign scenario of continued drift in USDCNY and CNY depreciation vs. its basket.

Looking across the various measures of the CNY exchange rate, our bias is to think that China is depreciating its currency, not keeping it stable. Figure 1 shows that the CNY clearly has been trending lower vs. the CFETS basket. The CNY has fallen 4.3% YTD vs. the CFETS basket, an annualized rate of depreciation of 12%. It has fallen through the 98 and 97 levels that many in the market expected to be the floor for the index if the policy objective is trend stability for the nominal trade-weighted rate.

Additionally, the extent of this nominal depreciation leads us to estimate that the CNY has fallen to its lowest level since last December on a real exchange rate basis even after accounting for the recent modest rise in Chinese CPI inflation (Figure 2).

1. For all of the talk of a new FX regime, USDCNY is essentially flat year-to-date.

2. Volatility of the USDCNY fix has tended to be lower than volatility of the CFETS basket until very recently (Figures 3 and 4). However, if the government were managing on a basket basis with an objective being stability in the trend in the basket, vol of the basket should be lower than vol of spot. To be sure, in Singapore, 3m spot vol is about 7.8% whereas SGD basket vol is only 3.2%. Admittedly, CNY spot vol has risen, so maybe things are changing. Perhaps the recent rise in fix vol and fall in basket vol indicates that the government has transitioned to targeting the basket, not the fix.  But the vol differences are still low enough and new enough to lead us to be uncertain.

3. China’s government seems keen to avoid large capital outflows driven by concern about CNY depreciation. We think this requires a stable or stronger CNY vs. the USD, not stability in the CNY vs. its basket.  Figure 5 shows that our estimate of corporate hoarding of foreign exchange, i.e. the difference between actual net FX settlement as reported by SAFE and the reported trade balance, tends to rise sharply when USDCNY rises, but moderate or reverse when USDCNY is stable or lower. We estimate these flows accounted for about 40% of outflows last year.

USD rally: If the US data drive a USD rally China will have to choose between spot stability at a cost of CNY reversal stronger vs. its basket or sustaining the CNY’s depreciation vs. its basket at a cost of a rise in USDCNY. The risk here is of a resumption of a USD appreciation trend back to its 2015 highs, not just a small or temporary bounce.

Perhaps the PBoC has been depreciating the CNY vs. its basket during the recent period of broad USD weakness specifically to create room for the CNY to reappreciate vs. the basket in the event of a USD recovery. This would allow it to keep USDCNY stable, at least in the early stages of any broad USD rally.

However, we tend to doubt this explanation.  One reason is that it would invalidate the whole concept of managing the CNY vs. a basket that the government has been advocating. Another is that if the USD TWI exceeded its past highs, China would have to accept CNY appreciation to new highs.

In contrast, we think the most likely scenario would be that the PBoC would push USDCNY higher in order to try to prevent the CNY from appreciating vs. its basket. In this scenario, we estimate roughly that if the DXY were to return to its November 2015 high, USDCNY would need to rise to about 6.86 to prevent appreciation on a basket basis. That’s for CNY stability vs. its basket. If the objective is further depreciation vs. the basket or on an REER basis, USDCNY would have to rise more sharply.

USD weaker: Goldilocks continues. A stable or weaker USD-G10 would likely lead China to keep USDCNY stable or slightly lower in order to continue trend depreciation vs. its basket.

How to trade this?

A USD rally scenario would be most disruptive for markets, in our view. Yet market pricing of risk has CNY risk moderating slightly. Implied volatility has crept lower while implied to delivered ratios have been roughly stable and the 6m/1y vol curve has steepened. Vol adjusted risk reversals have also been stable as vol levels have fallen.

We think the best ways to position for CNY stress generated by a stronger USD are in proxies for the CNY, not the CNY or CNH itself. Specifically, we prefer:

■ Long USDHKD 1y forward points. We expect the peg to hold, but if USDCNY rises significantly we believe the HKD forward points are likely to rise back to 400 – 500 as they did in January and February vs. the current roughly 83.

■ Long USDKRW. The KRW retains Asia’s highest beta both to risk appetite falls and stress in China. Additionally, seasonal factors tend to be particularly negative for KRW in May.

■ Short SGD vs. its basket.  We expect slowing growth and moderating inflation in Singapore should push the SGD 1.5 – 2.0% lower against its basket over the next couple of quarters even without CNY stress. A resumption of an uptrend in USDCNY would likely accelerate this move in the SGD, in our view.

In contrast, we believe the best way to trade the implications for the CNY of a resumption of broad USD weakness is by going short the CNY vs. its basket. We would expect the PBoC to continue pursuing CNY depreciation vs. the basket at roughly the recent pace if it can achieve this with a stable or slightly lower USDCNY. Crucially, the more that the CNY depreciates vs. its basket the more it will risk creating competitive stress for other EM currencies, in our view. Remember that China’s exports have retained or gained market share in all of its major markets bar Japan over the past year even with the CNY REER at a historical high.

You can get Credit Suisse FX Strategist research as well as many other interesting analysis from leading investment banks via our subscription.

This article was posted in Forex Analysis, Forex Market, Forex Strategies.
Scroll up